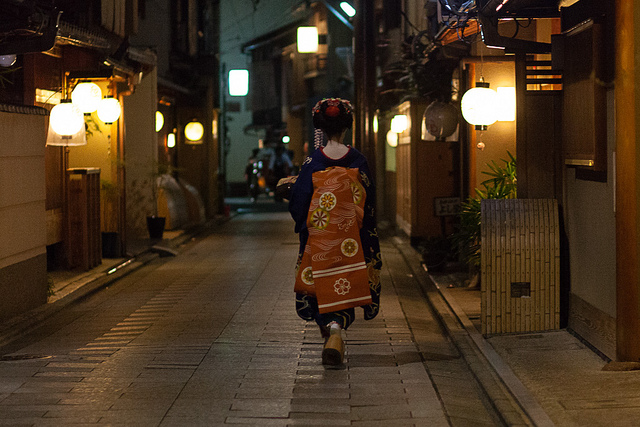 In July, maiko wear light kimono and kanzashi (ornamental hairpins) on fan motif. Their appearance is a refreshing relief in muggy summer of Kyoto.

It is draped in the Gion Festival this month. Senior maiko usually wear ofuku hairstyle but during the festival, they wear katsuyama hairstyle, which is decorated with many gorgeous kanzashi. People of Kyoto feel uplifted toward the festival as they see this coiffure.

Maiko usually wear kimono with seasonal flower motif. But especially in July, they often wear kimono which have patterns related to the Gion Festival. It is another pleasure for this month.

During the period, they sometimes wear yukata(a casual cotton kimono mostly worn in summertime). If you were lucky, there will be a chance to see them wearing it on the night of Yoiyama (eve of the grand parade).

You’ll see them enjoying night stalls with their customers. It’s just so adorable. 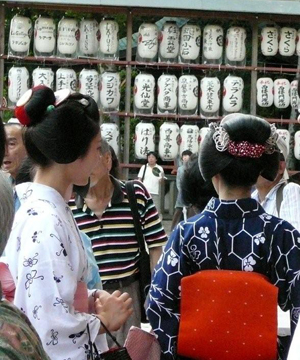 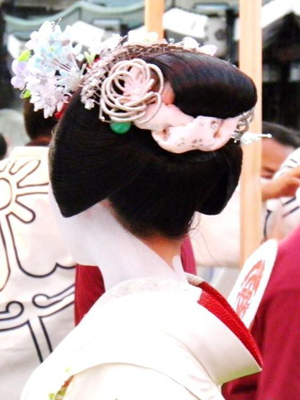 ●The 7th
Miyabi-kai at Yasaka Shrine

＊Miyabi-kai at Yasaka Shrine
This is an event that Maiko and Geiko of Gion-Kobu pay a devotional visit to the Shrine. They pray for their progress in dancing and health. 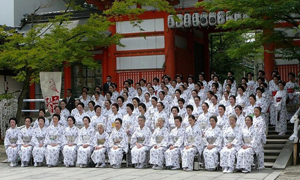 At Miyabi-kai, all Maiko and Geiko gather at Yasaka Shrine with Ms.Yachiyo Inoue, the master of Japanese dancing. They all wear in matching yukata. 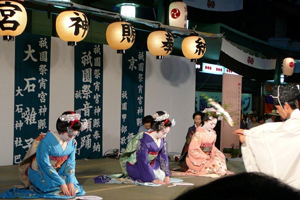 ●The 1st –
Arashiyama cormorant fishing at around Togetsykyo Bridge of Arashiyama

●The 2nd – 3rd
The Star Festival at Kodaiji Temple

The Star Festival at Kitano Shrine, Jishu Shrine, Shiramine
Shrine, and other shrines

●The 9th
The Water Festival of Kifune at Kifune Shrine

●The 15th
The Rice Field Festival at Matsuo Shrine 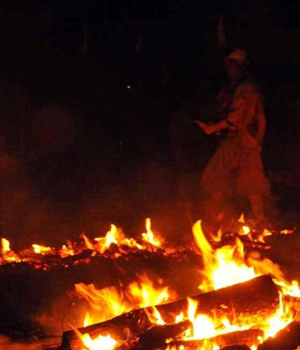 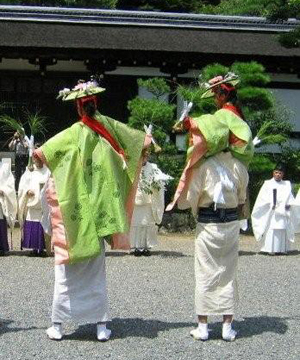 The little girls holding nursery-trees in hands are called ‘Ueme.’ They go around a front shrine three times to pray for abundant crops and huge harvest at the Rice Field Festival in Matuo Shrine.

*At Mitarashi Festival, people wade in Mitarashi Pond to purify themselves at Shimogamo Shrine

The Gion Festival ～bright contrast of stillness and motion～ 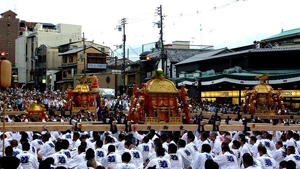 In the middle, you’ll see Nakagoza Mikoshi. On the left, there is Nishigoza-Mikoshi and Higashigoza-Mikoshi on the right. Shinko-Sai is one of the highlight event of the Gion festival.

The reason is…the Gion Festival is famous for the grand parade of Yamaboko floats. Right after the parade, Shinko-sai starts and the town of Kyoto is full of energy.

Shinko-sai is a procession of gods. Three mikoshis (portable shrines) are usually set at Yasaka Shrine. But once a year, during the period of the Gion Festival, they move away from the shrine to Shijo Otabisho (Otabisho means “inn for gods”).

Gods pass over the Kamo River and stay in a real world where people live. All mikoshis are carried by men of Kyoto. They pour holy sake over themselves and go on streets .

The air of excitement arises from all over their bodies with special shouts of the festival. It really is a vigorous event. This is the dynamism after the grand parade.

Then stillness comes. Gods stay at the Shijo Otabisho for a week.

On the 24th, gods and mikoshis return to the Yasaka Shrine. The return parade is called as ‘The Kankosai.’

It is said that if you visit the Shijo-Otabisho during the period every day, your wish comes true. However, there is a very strict rule. You must not speak a word from your home to the Shijo-Otabisho. If you speak out a word, your wish never realizes. The custom is called “mugon mairi” or “silent visit.” 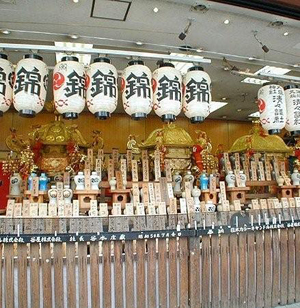 This is Shijo Otabijo where three Mikoshis from yasaka Shrine rest for a week from 17th -24th of July.

You might say “It is just a superstition!”, but I do not think so. Many maiko and geiko in hanamachi cross the Shijo Ohashi Bridge with serious face during this period.

They put palms together and pray in front of the sacred altar. It is an intriguing landscape and you might want to ask them what they pray for. But for them, it is very important and sacred ceremony during the week. So, please do not speak to them! 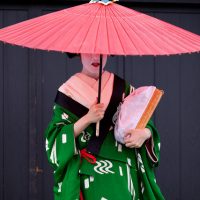 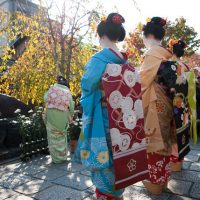