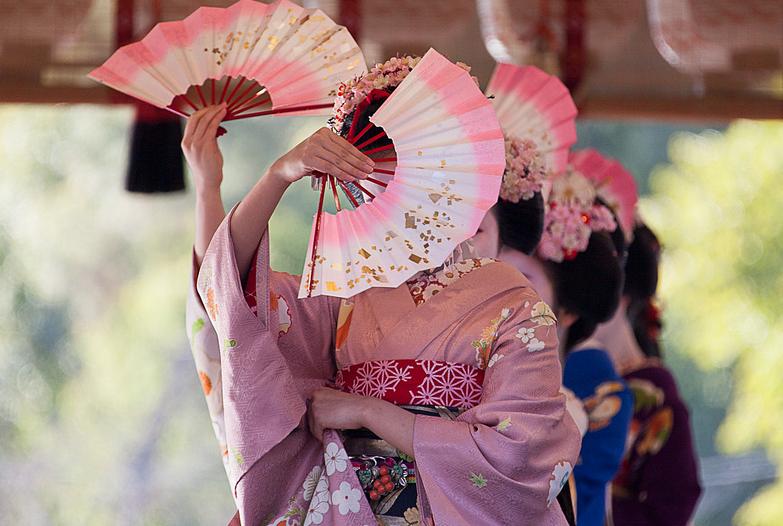 People all over the world continue to be enthralled and inspired by maiko in Kyoto. For example, let us see a fashion doll, Barbie. She is the very girl who make “girl’s dream”come true. Princess, bride, iconic heroines from movie and television series… variation goes on and on forever. Her fan includes little girls, teenagers and adult women…even their mothers and grandmothers.

In flower town, you often happen to see young girls and women transformed in maiko(geisha). There are tourists from America,Europe,China,Korea, other parts of Japan and more.

Barbie knew that it is the other dream she should make it come true for them. American toy company Matell,Inc gave birth to a maiko Barbie. Kimono, the white make-up, coiffure, everything about maiko was re-created perfectly. I hear that she even had replaceable hands for various posing like dancing.

Every time NARS cosmetics present unique products sold for only a limited period of time, it becomes a topic of conversation. Exactly two years ago, they presented a limited artistic make-up box called“BENTO BOX”. There were the two special rouges in it.

One is called “sakura”(cherry blossoms) and the other is “maiko”which symbolizes passion and power. Lip brush was wrapped in wisteria, maiko’s motif for kanzashi in May.

And it is Christian Dior at last. In the year to celebrate for its 60th anniversary, a former head designer, John Galliano showed a splendid haute couture collection named“Japonism”.It was inspired by maiko and geiko in Gion as well as kabuki and kado (Japanese flower arrangement). It was his 10th anniversary as a designer too, an extraordinarily beautiful creation was highly praised by the world.

But these are only one instance among many. If you look around carefully, things inspired by maiko and geiko are here and there. What captures people so much about them? For this month, I’d like to focus on maiko’s fashion and introduce their charms from a brand-new viewpoint.

What thoroughness! True dignity of women appears on her back view

Family crest of okiya is woven on every ‘darari no obi’

When I first saw maiko, it was her beauty of back view that touched my heart the most. White long neck, ‘darari no obi’ woven in dazzling gold and silver thread. There are traditional patterns of chrysanthemum and snowflake-shaped yukiwa, designs look like Japanese-style paintings. The end of long obi overlaps the other at her ankles.

They sway as she walks, and as they sway, hem of ohikizuri(kimono) shows fleetingly. It was perfect in both coloring and balance between length of obi and kimono.

We rarely see our own back views in daily life, unless we look in a mirror or someone takes picture of us. And in many cases, majority of people just care for ‘the front’ when it comes to fashion.

Sometimes on the street, I encounter beautiful ladies walking towards me. I look back and find their skirts with creases or hem is folded or turned up. What is worse, there seems to be no elegance in manner of walking.

Then all is lost sadly. Beauty becomes ruined and they just look like temporizing only the surface of themselves with trendy items. One might say“It is none of your business!”and yes, I understand.

But I hope that they care a little bit more about total beauty. For instance, their own back view and manner of behavior. Because to be particular about details is dressing up in a real sense, and there is a true joy to dress up.

By the way, let’s get back to ‘darari no obi’. Where do you think this special method of tying obi belt come from? I referred to historical facts and found that it is strongly related to kabuki world.

Hundreds of years ago, there was a popular actor called Kichiya Kamimura. He was inspired by a girl who was going for cherry blossom viewing, and invented a new way of tying obi belt which is quite similar to maiko’s one today. And there is another theory.

In an old famous kabuki play called Nozakimura, there is a heroine named Osome. She had innovative style for obi belt which is said to be an original form for ‘darari no obi’.

Secondly, why do you think people started to tie obi belt in this way? About this subject, I found an interesting description in a book“Kyoto Minami-za Story.” Tatsunosuke Mizuki who was a great actor of female role in Genroku period(1688-1704) started to wear long obi belt hanging down like maiko.

He was a tall man and ‘back’ is the very part where masculinity appears, so he wore the obi belt to hide his original sexuality as to play female part. Today Mizuki is known as a pioneer for ‘darari no obi’ in world of kabuki.

Beauty of obi belt is superb enough, but I wonder why some maiko have such a mysterious attraction while they still have a lovely innocent look. Perhaps it can be said that a long history established by great kabuki actors relates. They must have known graceful gestures better than real women.

When maiko becomes geiko, her impression will be much calmer. This way of tying obi belt is called“Otaiko-Musubi”

“Spring has come!” “Oh, it’s about summer!” “It will soon become autumn” “Winter is approaching…”

I think Japanese is a nation who is susceptible to changes of four seasons and love to talk about it in daily conversation. Just like flower kanzashi, there is a great seasonal flavor in maiko’s ohikizuri(kimono).

Of course, dyeing technique is Kyo-Yuzen. All kimonos are woven in silk, but a functional specification varies with season. Roughly speaking, from October to May, it is the lined kimono ‘awase’. In June and September, it changes to the unlined one ‘hitoe’ and ‘ro’ or ‘sha’ is worn in July and August.

There are so many changes, aren’t there? I cannot help worrying about maiko being so busy to replace kimono in a chest of drawers.

But as a matter of fact, this is not the only change.Details of ohikizuri (kimono) change little by little, as maiko gain more experiences.

The two pictures are both of Mamemaru-san of Gion-kobu dressed up in kuromontsuki. But there is a slight difference between them. I would like you to observe well and compare. Please look at “collars”and “patterns”of kimono. Can you figure it out?

It is not like having two collars both in red and white. A craftsman sews on top of a same collar by hand.I hear it differs depending on each maiko, but they say entire surface will be all in white after 2-3 years of experience, just like Mamemaru san on the right.

Similarly, the way of placing patterns changes with professional experiences and so on.Though it also differs depending on each maiko and varies a little in every flower town,a series of steps go like this in general. For young maiko, patterns are drawn fully on both shoulders like kimono worn by Mamemaru san on the left hand side. And it becomes just on one side, it will be have more serene mood like her on the right.

Like emboss processing, white embroidery stands out on red collar

Underskirt is called silken ‘nagajyuban’. Red is for maiko and pink is for geiko

And finally, I’d like you to see these pictures lined below. I might have been playing riddles a little too much, but this will be the last one so please concentrate. Now, which one is maiko’s and geiko’s ohikizuri ? Can you distinguish well?

From the color of it, you might want to say that black one on the left belongs to geiko. Nevertheless, the one in lapis lazuli blue is for geiko and the other is worn by maiko.

One significant difference is the length of sleeves. Geiko’s one is a lot shorter and maiko’s one is long－sleeved ‘furisode’.

Please have a look at black kimono for maiko.Second difference is tucks on shoulders and sleeves. They are called “Kata-age” ,“Sode-age” individually, the detail is also used for children’s kimono for Shichi-Go-San(celebration for third, fifth and seventh birthdays of children) .

In flower towns, it is a rule to tuck them up to keep lovely images of maiko. Height or age do not matter, all maikos wear them this way.

I hear that loveliness is thought to be more important for maiko. Today it is obligated for maiko applicants to graduate junior high school, but in old days girls started their profession at age of 11-13.

Yes, maiko used to be so young. Because of the fact, suitable dresses are made for their innocent age, and it is said that this relic still remains and inherited today.

‘Darari no obi’ and ’ohikizuri’. For this time, I introduce the two symbolic items for maiko. You must have noticed that there is a profound, considerate aesthetics behind their opulent appearances.

Colors,shapes,patterns… each arrangement of small details. And a style of dressing,too. If you ever find a change in maiko’s appearance, it is the unmistakable sign to say she has moved up in her career. In other words, she has been trying so hard to reach goal of her ambition.

Her final destination is to become geiko. Though it is not known very much outside ofJapan, maiko is geiko’s apprentice. I would like to tell you to watch over their praiseworthy way of lives in the future too. 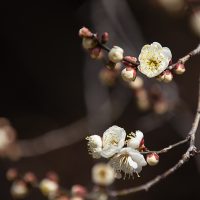 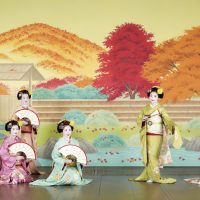